Kingsmen: The Golden Circle (2017) is directed by Mathew Vaughn and is a direct sequel to 2014’s Kingsmen: The Secret Service. Returning to the franchise are Taron Egerton, Mark Strong, Colin Firth and Edward Holcroft. Joining the returning cast is Halle Berry, Pedro Pascal, Jeff Bridges, Juliane Moore and Channing Tatum. There’s also Elton John in an annoying role as himself (ugh). The film premises expands on the world created by the first film through a new mission. 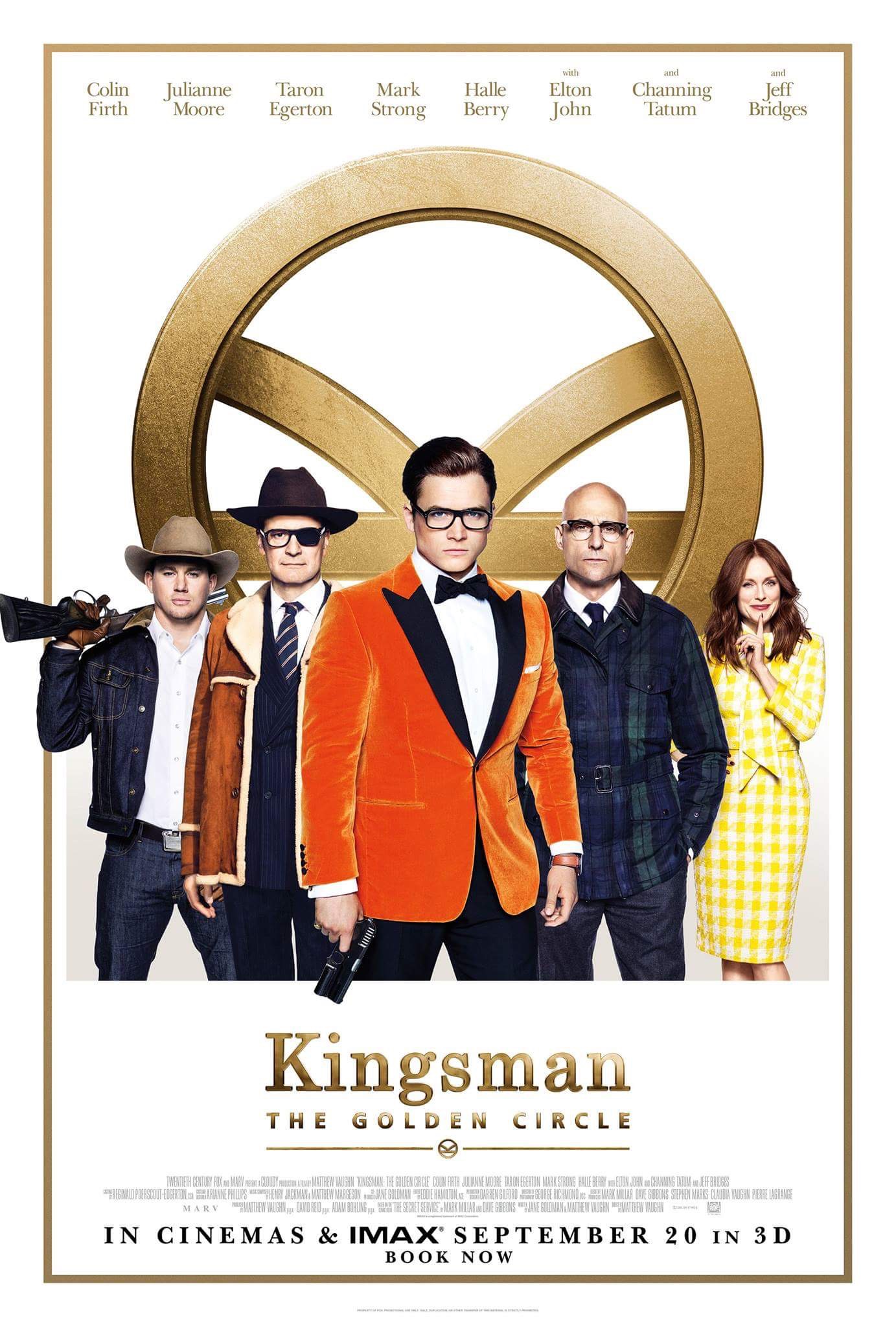 My first sequel on this blog channel was great. I can start by saying as far as sequels go, this one is pretty good. But as far as a stand alone movie is concerned, this film faltered.

So the cast returning to the film is brilliant as always. A fine welcome back. Taron Egerton is still the viewpoint character…but that’s understandable. Everyone is as good as they were in the last film. I’d say the biggest character development is Edward Holcroft’s Charlie. Having seen better days, the snobbish former competitor of Egerton’s Iggsy has now turned rough and tough bond henchman…and I absolutely dig the contrast in his two performances. The Americans join the cast well. I can’t say any of the American characters were not as instantly likeable as the characters from the original. Pedro Pascal is as smooth and dangerous as his famous Viper role on Game of Thrones. Jeff Bridges is Jeff Bridges no matter the role. Even Halle Berry was stomachable, I hope to see more of her and Channing Tatum in any possible third instalment. The film sold the latter as a big presence, but his screen time was wanting!

The addition of the Statesmen really did do a lot to expand this universe. Going into the film I had my reservation about having an American version of the Kingsman, but I must say I loved them more. I just loved how the two agencies were so different yet alike, and I loved how they managed to flesh out a Statesmen ‘culture’ without distracting too much from the Kingsman. Wow I’m saying Kingsman/Statesmen a little to much right now. I’ll stop.

Julianne Moore was fantastic as the villain. She was so original, menacing, hilarious, far more quirky than her predecessor played by Sam Jackson. I have to say, this is the most fun I’ve had watching a villain in a very long time. I’m not sure how other critics are receiving her, but I got to say hats off for owning this over the top performance. So entertaining. Which is why….I think she deserved a much better send off. Sigh.

And Elton John. I didn’t see the point of Elton John. Honestly any other celebrity could have filled his role, and they seemed to have him just so to have a celebrity appearance for the sake of it. He got so annoying to the point of ruining the film.

I really enjoyed how this film, harkened back to some of the memorable moments from the original yet didn’t try live in its shadow. They were included as a fun wink to the audience. This is why I thought it was a good sequel. It acknowledged the audience, and built up the world and characters from the original well, taking them on an interesting new direction. It was more of the same – but the more was needed.

But I really can’t say I like how certain things in this movie played out, which is why it faltered ever so lightly. I’m going to be purposely vague so as to avoid spoilers here. But:

1) a romantic conflict seemed manufactured as the problem was easily avoidable that caused the fight.

2) the plot twist regarding a turncoat was as unneeded as it was in the last Kingsmen (you’d think they’d learn). And the suspicions of one character regarding the turncoat character are never explained.

3) the villain’s plan wouldn’t have gotten anywhere unless the US president had an agenda of his own, and it’s remarkable that he did.

4) the student pursuing the mentor to return is a cliche tired and done.

This must be some of the vaguest stuff I’ve said on my blog thus far. This is because despite all this, I still recommend the film!

What this movie does is one of the things movies ought to do. Entertain you. I went in to see it, bogged down in my brain from too much work. It really loosened me up. And that’s the point. I recommend Kingsman 2 for those who haven’t yet checked it out!

2 thoughts on “Kingsmen: The Golden Circle. Whiskey, whips and weirdos.”